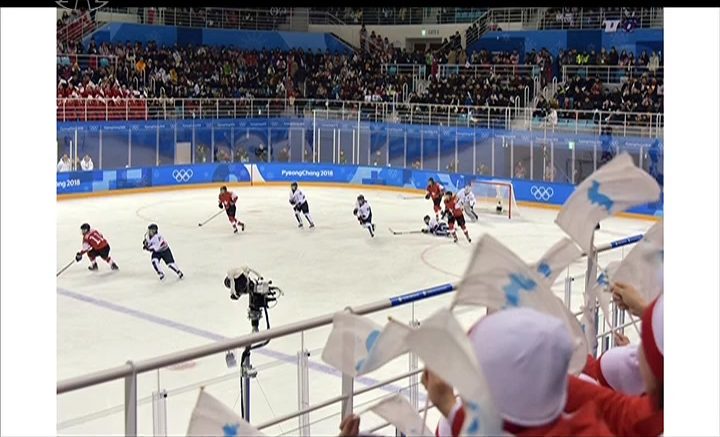 With the second full day of competition ended at the Winter Olympics in PyeongChang, North Korea’s KCTV has yet to feature any coverage.

On Sunday, the broadcaster included several still images from Olympics competition in its news bulletin, but they were in the context of the attendance of Kim Yong Nam and Kim Jo Yong’s at an ice hockey match where the two Koreas fielded a combined team.

The images are below and include two from the actual contest. These are the only two images – still or video – of Winter Olympics competition broadcast on Korean Central Television thus far, according to my monitoring.

The selection also included a photo that is rather more focused on IOC President Thomas Bach and South Korean President Moon Jae-in than it is on Kim Yong Nam and Kim Jo Yong. 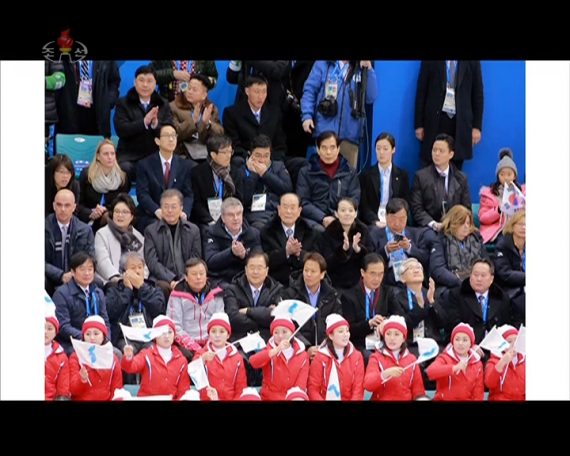 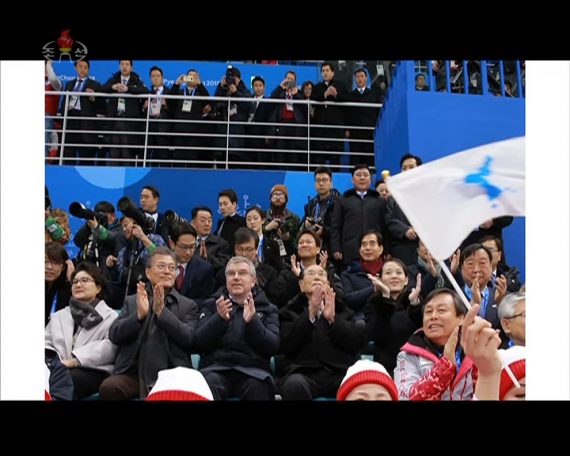 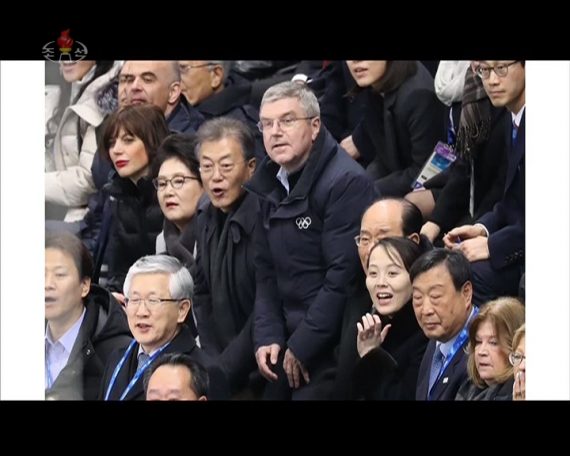 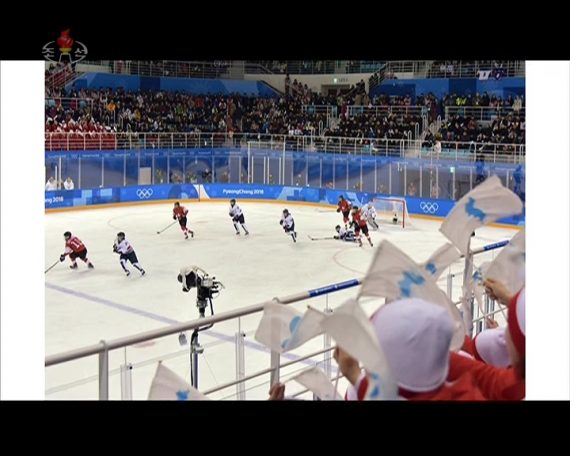 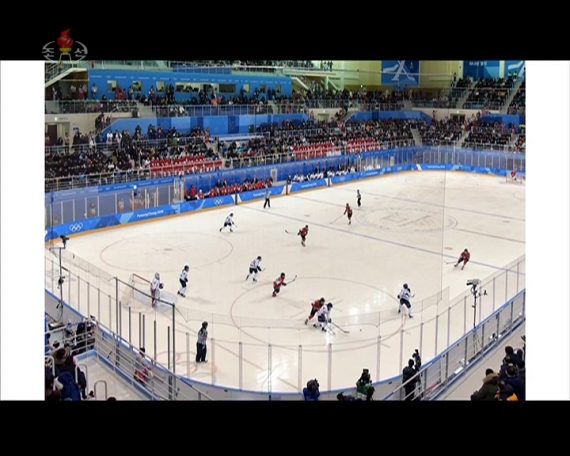 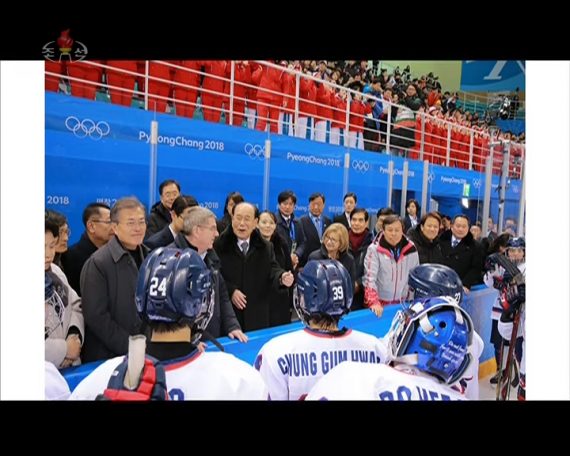 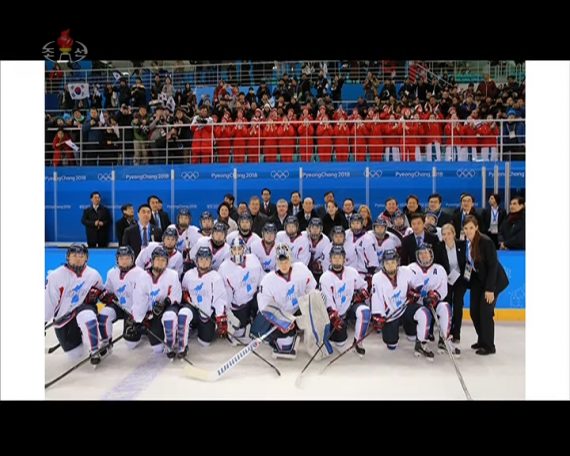 Six still images of a taekwondo performance by athletes from both countries were also broadcast, but this was not Olympics competition. 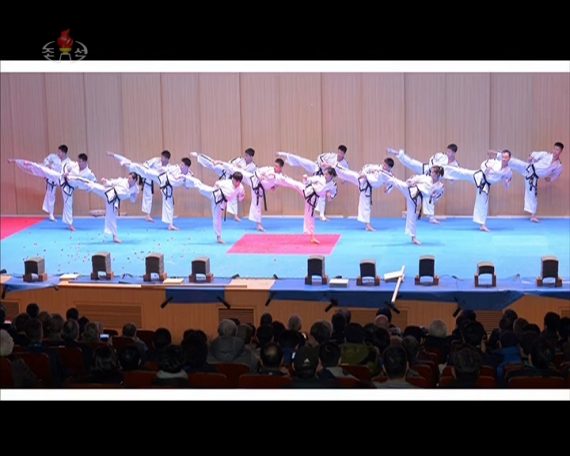 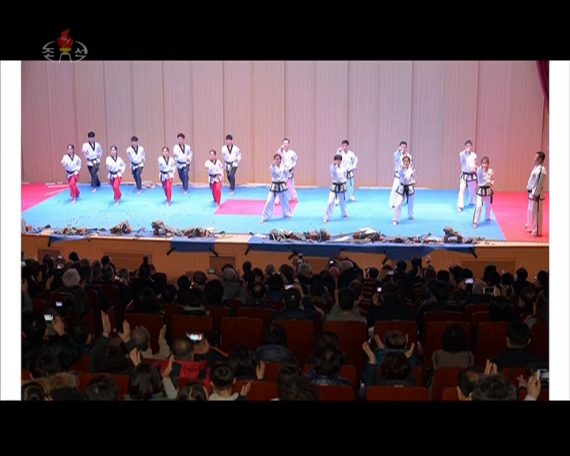 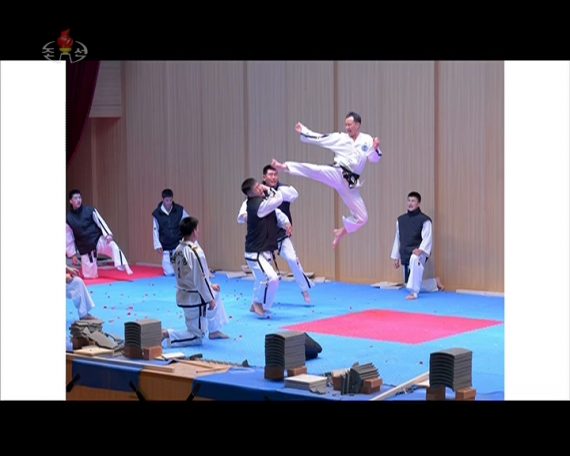 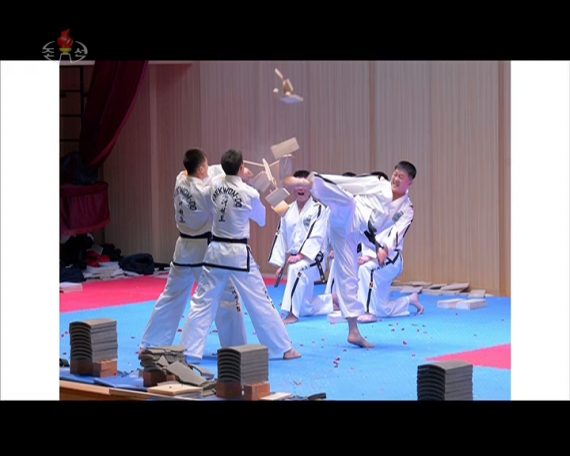 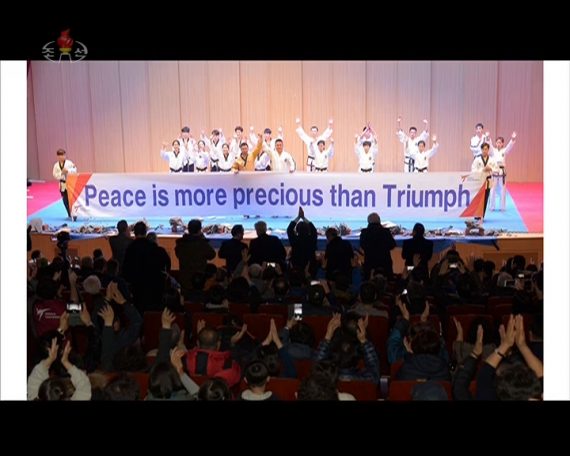 It was no surprise thatKorean Central Television hasn’t carried the opening ceremony or any Olympics coverage live. KCTV rarely broadcasts anything live except for major parades and fireworks at new year. Even the party congress in 2016, a major political event, was shown on tape-delay and it opted for a delayed broadcast for last week’s parade.

In previous years, coverage has lagged by a couple of days so I was expecting to see something on Sunday, but Sunday came and went with nothing but the usual schedule of old movies, kids shows, documentaries about the Kim family and science programs.

Even the weekly international sports news on Sunday night didn’t mention the Olympics. Instead it featured video highlights from the Snowboard World Cup in Feldberg, Germany, the St. Petersburg Open tennis, and a Euroleague basketball match. All took place a week earlier.

A night earlier, KCTV broadcast still images of the opening ceremony but the focus was again on the attendance of the North Korean delegation.

As usual, the work of senior party leaders is given priority over everything else.

The lack of coverage raises the question of whether Korean Central Television has been able to secure broadcasting rights for the Olympics. As reported previously, rights for North and South Korea and held by Seoul Broadcasting System. During past Olympics it has allowed KCTV access to footage and the North Korean broadcaster has included 1-2 hours of competition in its programming each night.

It’s possible KCTV is awaiting the return of the North Korean delegation, both so it can give priority to political news over sport and so it can make a decision on what to broadcast once the visit have been deemed a success. If that’s the case, we should see highlights begin on Monday.

It’s been suggested that perhaps the Olympics are playing out on Sport TV, a fairly new North Korean TV channel that is on air at weekends. But Sport TV only has limited availability across the country. It can also not be received via satellite so monitoring is difficult. Putting the Olympics on Sport TV would would be out of step with North Korea’s typical broadcasting practice of placing all the major programming on Korean Central Television, which is on air across the country.