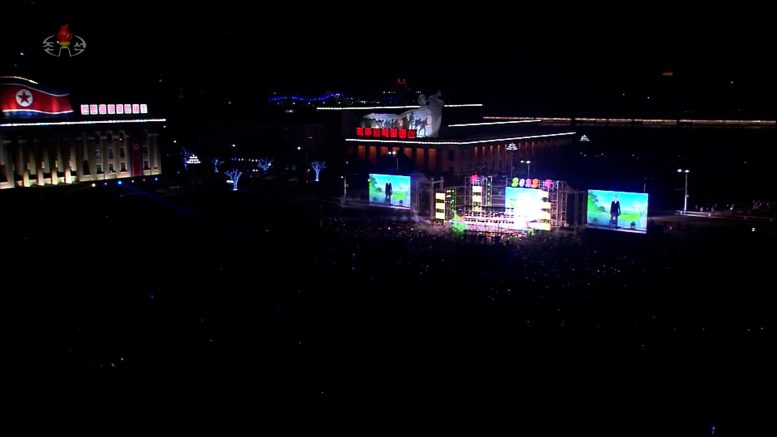 The annual New Year’s Eve event in Pyongyang is one of the only times each year that Korean Central Television broadcasts live.

The event consists of a concert in Kim Il Sung Square before midnight and fireworks to start the new year. It has been televised since 2018 and is usually shown in two parts: the first half of the show runs from around 11pm for about 50 minutes and the second half returns just before midnight for the raising of the national flag, playing of the national anthem and a fireworks display.

During the short gap between the concert and flag raising, which appears to be used to move people around the square, KCTV shows propaganda music videos.

In one of the opening shots of the broadcast, the KCTV live broadcast truck can be seen parked on the edge of Kim Il Sung Square. 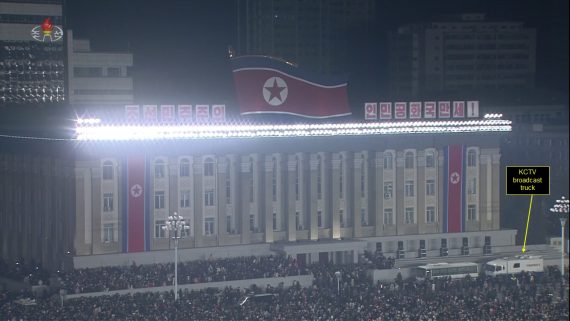 For a TV station that doesn’t do much events coverage, the broadcast is surprisingly good and makes use of multiple cameras spread around the square and even a drone.

Typically, state television broadcasts are carefully scripted, edited and have to pass several layers of approval before they go on air. A live broadcast risks something untoward being fed into homes across the country and that’s likely why it is so seldom seen.

Watching the live broadcast and the repeated broadcast, which aired later in the day on January 1, gives a glimpse into some of the editing decisions made by KCTV.

I’ve included a couple of side-by-side clips below and you’ll see that during the concert the edits are fairly minimal. At the opening of the first song, the live broadcast didn’t properly catch the name of the song on screen and that’s been corrected in the edited version. There are also a few more shots showing the singers on stage rather than wide shots of the crowd in Kim Il Sung Square. But in general, the editing changes seem to have been done to make the program better and more visually appealing.

The video of the flag raising is a little bit more interesting and it uses editing to change the reality of what took place.

Just after the close struck midnight, the national flag was raised while thousands in Kim Il Sung Square looked on. In the edit, a few more shots of people in the crowd have been added to make the production look better, but at the moment the flag reached the top of the pole new footage has been substituted.

Live viewers will have seen the flag fail to initially unfurl. TV coverage quickly cut away from the image of a tangled flag but the North Korean flag is one of the central pillars of TV propaganda so the unsatisfactory image could obviously not be left alone.

In the edit, a whole new shot of the flag waving majestically in the breeze — as it was surely intended originally — was cut in.

If you look closely in the moments before the flag reaches the top of the pole, a drone can be seen racing across the square to get the shot. Alas, it was not to be. 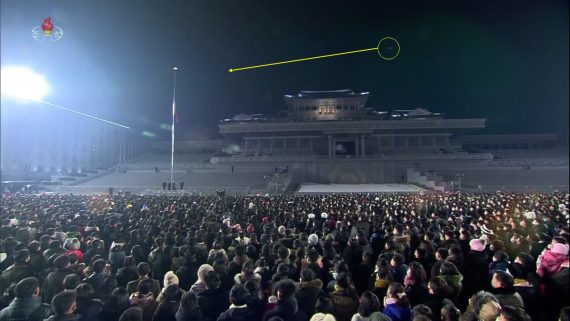 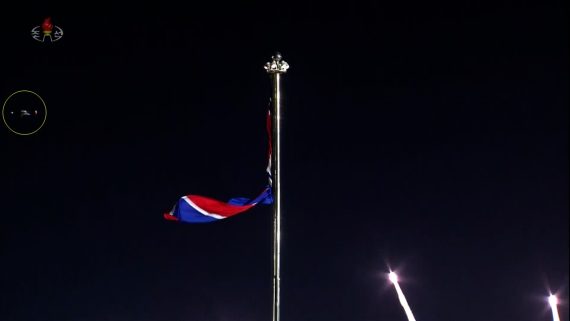 Here’s the flag visual that was substituted into the recorded version: 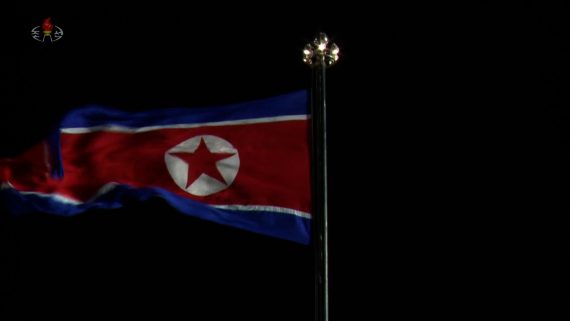