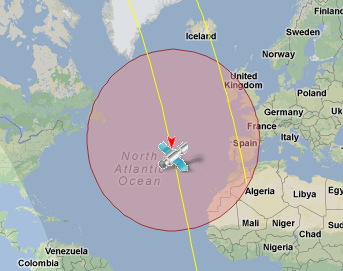 It’s been a few days since North Korea put a satellite into space — a massive technological step for the country and something widely condemned by other countries — but we’re still not much closer to knowing anything about what’s up in space.

The objects have been identified as the Kwangmyongsong 3-2 satellite (the second version of the satellite. The first version was destroyed in April’s failed launch), a rocket booster from the Unha-3 rocket and two pieces of rocket debris.

NORAD has also issued data that describes the orbit of the satellite. Using the data, called a two-line element (below), it’s possible for satellite tracking software to determine where the satellite is at any moment.

And so trackers, including the N2YO online tracker, are active and can indicate where the satellite is at any one time.

This is an important first step for anyone trying to hear any transmissions from Kwangmyongsong 3-2, because it’s only possible to receive signals from the satellite when it’s in range. You can see the area in range at any moment by clicking the “draw footprint” box underneath the N2YO tracker.

The most North Korea has said about the satellite is that it would transmit on 470MHz, but we don’t know if that’s an exact frequency or just an indication of the frequency band.

There’s a global frequency band for space to Earth weather satellite communication from 460MHz to 470MHz. Above 470MHz is globally assigned to broadcasting usage, althoug China uses 470MHz to 485 MHz for satellite communications. North Korea doesn’t have such a usage, according to the international frequency band plan from the U.S. FCC. which does list DPRK exceptions in other bands.

It’s also not known what the satellite is transmitting — assuming it’s working.

The satellite was supposed to have several roles.

Kwangmyongsong-3 as an earth observation satellite will assess the distribution of forests and natural resources of the DPRK, the level of natural disaster, the crop estimate, etc. and collect data necessary for weather forecast, natural resources prospecting and others.
…
Kwangmyongsong-3 has video camera mounted on it and will send observation data including pictures to the General Satellite Control and Command Centre. It weighs 100kg and will circle along the solar synchronous orbit at 500km high altitude. Its life is two years. – KCNA report in March.

That was earlier this year. After this week’s launch, North Korea has said just one thing about its transmissions.

That mirrors claims the state media made back in 2009 when North Korea first claimed to launch a satellite (something that was widely thought to an unsuccessful launch attempt).

It is sending to the earth the melodies of the immortal revolutionary paeans “Song of General Kim Il Sung” and “Song of General Kim Jong Il” and measured information at 470 MHz. By the use of the satellite the relay communications is now underway by UHF frequency band. — KCNA, April 5, 2009.

But it’s also something that the DPRK never mentioned when talking about Kwangmyongsong 3-1, the first version of the satellite, back in March. Of course, it’s possible the payload has changed, but if so it’s an interesting change.

To-date, no one has reported hearing anything that could be coming from the satellite. No music, no data, no telemetry. Nothing.

It could just be taking time to discover its frequencies. It’s a slow job because the satellite is only in range of any point on Earth for a maximum of about an hour a day, and that’s split into several passes of about 10 minutes long.

But as the days go on, it will become increasingly likely that the satellite has malfunctioned in some way.