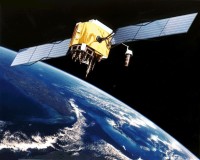 North Korea has developed a powerful jammer that can disrupt GPS (Global Positioning System) satellite signals over a range of “more than 100 kilometers,” according to a South Korean government report, Yonhap News said Tuesday.

News of the jamming equipment was included in a report submitted to South Korea’s parliamentary committee on defense this week, the news agency said.

The South Korean capital lies about 50 kilometers from the border region so a jammer with such range could disrupt or wipe out GPS signals in Seoul and the surrounding area. The city and region up to the border is littered with military installations and equipment, a lot of which makes use of GPS satellite positioning signals.

GPS signals in the area have been disrupted at least twice in the last year. In late August 2010 disruption occurred that was blamed on a jammer in Kaesong, which is about 60 kilometers from Seoul. In March this year signals were disrupted in Seoul and two cities closer to the border, Paju and Incheon, for which the North was again blamed.

The South Korean government report said the DPRK had imported “about 20 communications and radar jamming devices from the old Soviet Union.” Such units mounted on vehicles had been deployed near the border and disrupted GPS signals within a range of between 50- and 100 kilometers, the report said, according to Yonhap.

The DPRK has a regiment-sized electronic warfare unit near Pyongyang, and several battalion-sized units near the border, Yonhap said.

The report also said North Korea could be developing an “electromagnetic pulse” (EMP) device. Such EMP units are capable of emitting an incredibly strong electromagnetic pulse that can penetrate and overload electronic devices over a wide region in much the same way a lightning strike can fry electronic circuitry.

However, Yonhap said the report did not claim any evidence that an EMP weapon is actually under development. The supposition was based solely on North Korea’s sophistication in other areas of electronic weapons development.

“We don’t have any confirmed intelligence, but given the rate of the North’s development of new electronic devices and EMP development in other countries, it’s possible that North Korea will also develop (EMP bombs),” the report said. — Yonhap News, Sept. 6, 2011.