North Korea has twice attempted to launch satellites into space in the past: once in 1998 and once in 2009. The success of the launches is an issue of debate — monitors, both governmental and amateur, never managed to detect signals from the 2009 satellite — but they were immortalized on two North Korean postage stamps.

The first is from 1998 and illustrates the August 31st launch of Kwangmyongsong-1.

The launch came during the country’s “arduous march,” a period of extreme famine in the country that is estimated to have killed between 900,000 and 3.5 million people. At the end of the year, North Korea would call the launch the high point of the year:

The most remarkable success gained in the forced march this year is artitifical satellite “Kwangmyongsong 1” which was launched into orbit on august 31. The scientists and technicians of Korea launched into orbit the first artificial satellite, a product of their own wisdom and technology, fully demonstrating the national power of Korea with a powerful scientific and technical force and the solid foundations of the independent national economy. — KCNA, December 31, 1998. 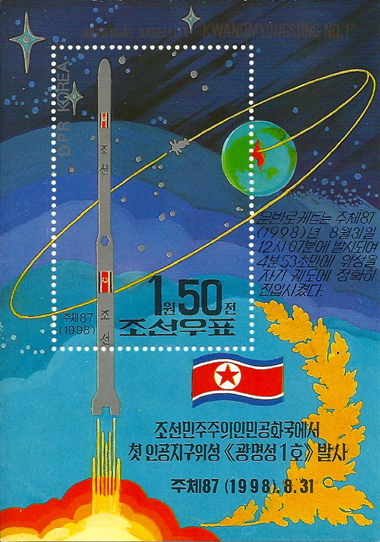 The second illustrates the April 5, 2009, launch of Kwangmyongsong-2.

The satellite was supposedly broadcasting revolutionary songs, but they were no reports of their reception:

It is sending to the earth the melodies of the immortal revolutionary paeans “Song of General Kim Il Sung” and “Song of General Kim Jong Il” and measured information at 470 MHz. By the use of the satellite the relay communications is now underway by UHF frequency band. — KCNA, April 5, 2009 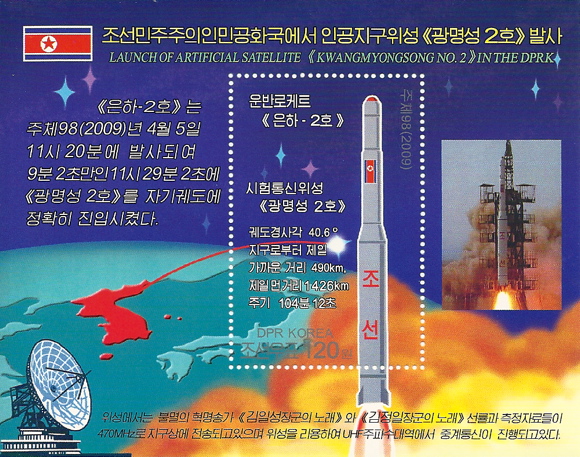 It can probably be assumed that a stamp will follow later this year marking the launch of Kwangmyongsong-3, due between April 12 and 15th, as long as all goes to plan.

The domestic launches aren’t the only rockets to appear on North Korean stamps. Here are three from earlier marking major moments in the Soviet space program.

The first two relate to a Soviet moon rocket. The third looks like it’s marking Sputnik. 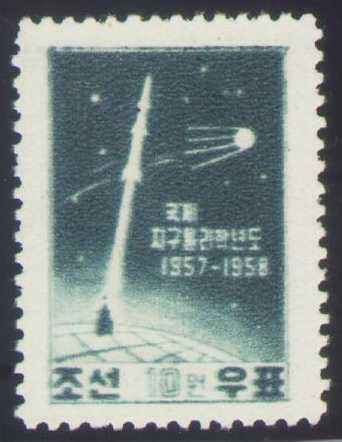