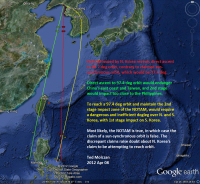 If all goes according to plan, North Korea will launch its Unha-3 rocket from the Sohae launch facility in just a day or two. The rocket is said to contain an earth observation satellite that will orbit the globe providing pictures and climatic data.

Getting all the pieces to work as planned will be no small feat for North Korea. Its previous attempt to launch a satellite using a three-stage rocket failed in 2009 when the third stage didn’t ignite, sending it and a satellite plunging into the Pacific Ocean.

Assuming all three stages of the rocket succeed this time, the precision with which each stage fires and flies will be key to getting the satellite into the correct orbit.

The intended orbit was first announced on March 16, when a KCNA bulletin said the Kwangmyongsong-3 satellite will be “a polar-orbiting earth observation satellite.”

A polar orbit, as its name suggests, sends a satellite over or close to each of the Earth’s poles. In this case, it will travel across Asia from north to south before crossing the southern pole and traveling back south to north across the opposite side of the world. It will then cross the north pole before heading back across Asia.

A KCNA interview with a North Korean space official provided more details on March 28 with the news that the satellite, “will circle along the solar synchronous orbit at 500km high altitude.” A solar-synchronous orbit is a precise orbit that requires an accurate launch — and satellite watchers spotted a discrepancy between this intention and North Korea’s launch plan, which was detailed by North Korea Tech on March 21.

To be sun-synchronous, a 500 km orbit requires an inclination of 97.42 deg. At the latitude of the launch site, a trajectory that directly ascends to that inclination requires a launch azimuth of approximately 192.3 deg (12.3 deg west of due south). The azimuth from the launch site through the various impact zones downrange should agree closely with this value, typically within a degree or so, absent any significant yaw-steering (aka dogleg) early in the ascent. The azimuth from the launch site to the midpoint of the southern boundary of the 2nd stage’s impact zone is 181.0 deg, which is far from the required 192.3 deg. – Ted Molczan

So, the launch trajectory suggested by the North Korean notifications doesn’t match that needed for the stated orbit.

Molczan produced this graphic that shows the announced launch trajectory (red) and what’s actually required to get the satellite into the 500km solar-synchronous orbit. North Korea’s problem with these two launch paths is that one involves the first stage landing on South Korea while the other sends the rocket over populated areas of China and Taiwan with the second stage possibly impacting The Philippines.

The intended launch path seems to have been chosen to keep the rocket over water.

Another possibility for the launch was visualized by Bob Christy on his Zarya website, but he notes “it is an ambitious manoeuvre for a first launch to orbit.”

Whether the satellite makes a “solar synchronous” orbit — or even makes it into space — won’t be clear until after the planned launch but does the precise orbit matter anyway? To the North Koreans, probably not.

After all, North Korea already has access to weather imagery through the World Meteorological Organization. Getting a satellite into space and having it transmit something would be a significant technological feat for the country. It would make the DPRK only the 11th country to manage such a task and that alone would represent a big step forward for the country.