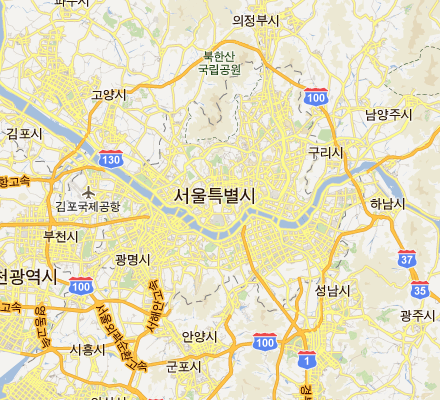 North Korea issued one of its most direct threats yet on South Korean media outlets on Monday.

The threats, to stage “a merciless sacred war” and to blow up “dens of monstrous crimes” came after South Korean media coverage of the Korean Children’s Union anniversary events that are currently taking place in Pyongyang.

From May 29 the group set in motion Chosun Ilbo, Choongang Ilbo, “A channel” of Dong-A Ilbo, KBS, CBS, MBC, SBS and other media to launch a campaign defaming the above-said celebrations. It went the lengths of resorting to a new campaign of hurting the dignity of the supreme leadership of the DPRK, availing itself of this opportunity. — KCNA, June 4, 2012.

The newspapers were singled out and direct threats made against their editorial offices:

But take a closer look at those coordinates.

Those given for the Chosun Ilbo and Dong-A-Ilbo are incorrectly stated because the maximum value for minutes and seconds measurements is 60. Sixty seconds make a minute and 60 minutes make one degree.

Perhaps it’s a typo, but the Chosun Ilbo’s actual location, at 37°34’06” North and 126°58’35” East, is different enough from the location listed by KCNA to rule out an error on a digit or even two digits.

It’s unclear exactly what those coordinates represent and how they could be so wrong.

Similarly, the Dong-A-Ilbo’s location is well off course.

The only one that’s close — both written and located — is for the offices of JoongAng Ilbo, although KCNA has North Korea’s military targeting a building across the street.

UPDATE: Evan Ramstad at The Wall Street Journal notes “A reporter at another Seoul-based Web site, Asia Business Daily, also suggested the numbers in excess of 60 could have been a percentage representation of the minutes and second figures.” The unnamed reporter appears to be correct!

It appears decimal locations for the Chosun Ilbo and Dong-A-Ilbo were converted to degrees, minutes and seconds by simply inserting the appropriate marks in the number. It should of course be a mathematical step.

So, that explains the error.

1 Comment on "DPRK targets South media, but coordinates are wrong"