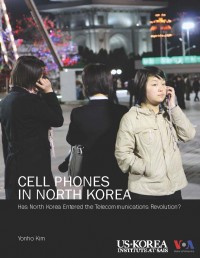 North Koreans used cell phone messaging to independently organize a soccer group, surprising authorities, according to a new report on cell phone usage in the country.

The soccer club was apparently organized by a group at Kim Chaek University of Technology in Pyongyang, and could be one of the reasons that pushed authorities to launch a regional cell phone service that was more restrictive than previous offerings, said the report by Kim Yonho, a journalist with the Voice of America.

The report, “Cell Phones in North Korea,” was earlier this month by the U.S.-Korea Institute at SAIS, the Johns Hopkins School of International Studies. Kim is a long-time reporter on North Korea having worked for Radio Free Asia before joining VOA.

His report walks through numerous aspects of cellular telephony in the DPRK, including the technical side of the network, the phones and the operator Koryolink. But perhaps the best parts are anecdotes from North Koreans.

There’s the tale of the man who couldn’t afford a cell phone and so couldn’t get a girlfriend, the ease with which one can get a cell phone under a fake name through a broker hanging around on the street outside telecom offices, and the importance of cell phones even in rural areas among those involved in trade.

Kim based much of his report on a series of interviews with 12 defectors who are now living in South Korea. While interviewing defectors can sometimes result in a skewed view of North Korea, the reality of reporting on the country is that they are one of the few sources of first-hand information. Kim acknowledges his sample size is small, but adds he tried to confirm much of what was said with additional interviews with experts.

According to Kim’s reporting, cell phones have amplified the gap between the haves and have-nots and become an instant symbol of wealth. This has also led some users to be attacked for their handsets and, in one case, a thief was killed when he attempted to steal a phone from the house of a regional police chief.

The use of cell phones to independently organize, as was the case with the soccer players, appears to be a relatively rare incident but it underlines one of the risks to the government of giving people mobile phone access.

This is one of the most interesting questions surrounding the launch of mobile telephony in North Korea: when the government relies on strict information control to keep its citizens in order, why voluntarily provide a new way to communicate?

Kim’s work delves into this and the surveillance that takes place on the network.

According to one of Kim’s sources, who was an agent for the Ministry of People’s Security, all calls and text messages are recorded by the Communications Interception Bureau of the Ministry for State Security. The source told Kim he was able to look up call records as part of an investigation but only after approvals from multiple government agencies. Agents only have access to the logs for “crimes of national importance,” Kim’s source told him.

The report is well worth a read for the multiple anecdotes and understanding it brings to several issues that come from Kim’s interviews.

It can be downloaded here. SAIS has also posted a video of the report launch, which can be viewed on YouTube.