The Pyongyang University of Science and Technology turned out its first round of undergraduates last week, marking a significant achievement for North Korea’s first privately-funded university.

The 100 students received their Bachelors degrees in a ceremony in Pyongyang that was attended by the co-presidents of the university and members of the local diplomatic community.

After graduation, some of the students will stay on at PUST to pursue graduate degrees while some others will leave for other state universities in North Korea. PUST said it also actively sends students overseas to universities in Europe and Asia to pursue short- and long-term study.

Students attend a graduation ceremony at the Pyongyang University of Science and Technology on November 19, 2014 (Photo: PUST)

The students were among those who entered the university when it opened in 2010, studying a year of English and then spent three years majoring in electrical and electronic engineering, computer science, agriculture and life sciences, or finance and management, PUST said.

It’s the second graduation ceremony for PUST. The first, in May this year, conferred degrees on graduate students. Some of those students have gone on to study overseas, PUST said.

Graduate students have access to the Internet at PUST — something that is still unusual in North Korea. 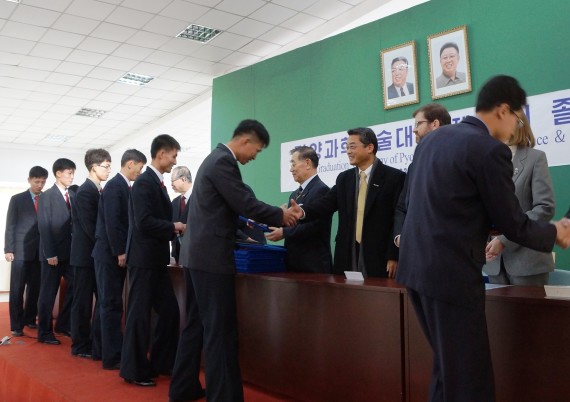 Students accept degrees during a graduation ceremony at the Pyongyang University of Science and Technology on November 19, 2014 (Photo: PUST)

PUST is unique in North Korea. It was established after years of fund raising by Kim Chin-kyung, a Korean-American evangelical Christian who also started a similar university in Yanbian, China.

Kim’s unlikely path to founder of the North Korean university began in 1998 when he was arrested in Pyongyang while on a visit, accused of being an agent for the U.S. C.I.A. After weeks of interrogation, he was released and he returned to China. Two years later, a North Korean official would visit him at his university in China and ask him to consider establishing a similar center in Pyongyang.

The university has attracted attention not just for its unique overseas roots but also the strong Christian ties of many of its teachers. PUST discourages teachers from talking with journalists when they return home so little is known about the university and its inner workings.

A veil was lifted recently with the publication of “Without You, There is No Us: My Time with the Sons of North Korea’s Elite,” a book by writer Suki Kim that chronicles her time spent teaching at PUST in 2011.