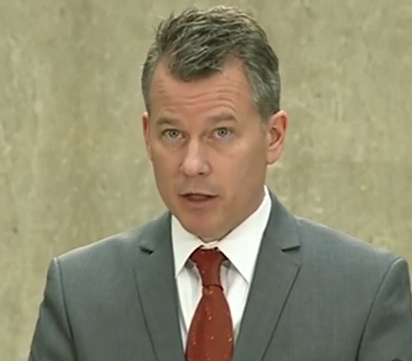 The State Department said Monday that it remains confident in the Federal Bureau of Investigation’s conclusion that North Korea was responsible for the cyber attack on Sony — despite a growing number of voices saying that might not be the case.

There has been some skepticism about North Korea’s involvement since the first reports earlier in December and that has increased in the last week.

So on Monday at its regular news conference, the AP’s Matt Lee asked State Department spokesman Jeff Rathke about the reports.

Here’s the questioning, which begins at the 2:12 mark. A transcript is below.

QUESTION: Okay. You’re aware of reports that have surfaced over the last couple of days that suggest that North Korea might have actually had absolutely nothing to do with this and that, in fact, it was – it is more likely that it involved – that the hack involved disgruntled former Sony employees? Have you seen those reports?

MR. RATHKE: Well, we are aware that there have been some reports of that kind. However, as the FBI has made clear and the United States Government stands behind the FBI analysis, we are confident that North Korea is responsible for this destructive attack and we stand by that conclusion.

QUESTION: Are you aware of any time the U.S. Government has been – made such an allegation or accusation and has been wrong?

MR. RATHKE: I don’t have any specific examples to mind. Is there something you have in mind?

QUESTION: No. I’m just wondering how it is that you’re so sure of what they have come up with, what the FBI and the other investigators have come up with, when it seems that there are these reports suggesting a highly plausible alternate scenario that doesn’t involve an unpredictable and nuclear-armed country.

MR. RATHKE: Well, again, I’d refer you to the FBI for questions about the details of their analysis. They’ve released some of the —

MR. RATHKE: — some of their conclusions and – on which they’ve based their analysis. And I would also remind that the Government of North Korea has a long history of denying responsibility for destructive and provocative actions.

QUESTION: Right. But this building is comfortable with the – this building being the main building in Washington that deals with foreign governments is still —