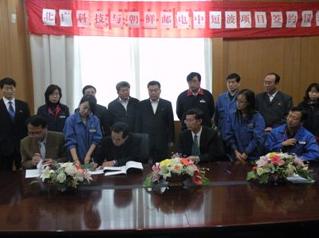 When North Korea launched a modernization of its broadcasting network in 2011, the Chinese company chosen to supply new TV and radio transmitters to the country faced a problem.

The location of broadcast towers in North Korea is so much of a state secret that engineers from the company weren’t permitted to travel to the DPRK to help install the transmitters, the company, Beijing BBEF Science and Technology, said on its website.

Instead, eight North Korean engineers spent a month in China being trained on how to install and operate the devices, which included a medium-power TV transmitter, several shortwave radio transmitters and a powerful mediumwave (AM) radio transmitter.

Firstly, President Zhao Baoshan congratulated to the trainees on what they had learned and appreciated their performances. Then Vice President Ye Jin gave a short speech, praising the progress made by these technicians. North Korean expressed gratitude for the training and mentioned their wishes for further cooperation with BBEF. Last but not least, Party Committee Secretary Zu Wei and Vice President Ye Jin awarded the interns with Certificates of Completion. — BBEF website in English

Perhaps it’s an indication of the importance of propaganda and the government’s official media system that it’s not willing to allow outsiders to travel to the transmitter locations.