A North Korean delegate interrupted an event being held at the United Nations on Thursday that was focusing on Human Rights in the DPRK.

The event was organized by the U.S. and featured Ambassadors Samantha Power and Robert King on the panel alongside journalist Barbara Demick and others. There were 23 defectors in attendance, according to the U.N. 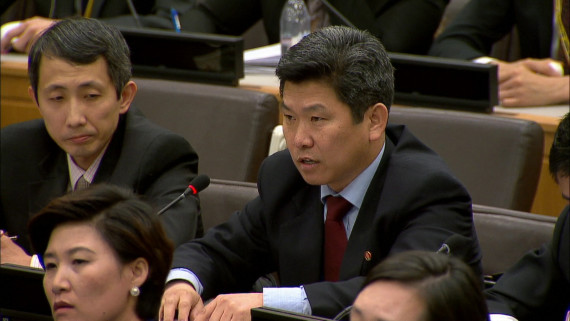 A North Korean diplomat speaks at a human rights event at the United Nations on April 30, 2015.

The North Korean diplomat began reading a statement, at one stage turning on a microphone. Ambassador Power asked that the mic be turned off because it wasn’t a sanctioned statement while Demick, as can be seen in the video, offered a chance to speak later in the proceeding.

Defectors stood up and shouted in Korean as Power and others called for calm and a U.N. security team assembled. An observer who speaks Korean said the shouts included “Shut up!” ”Free North Korea!” ”Down with Kim Jong Un!” and “Even animals know to wait their turn.” — Associated Press, April 30, 2015.

South Korean Ambassador Oh Joon said, “the delegation of the DPRK today disappointed us. They were interrupting the process. They should have spoken when they were given a chance. So, I’m very disappointed. I think it’s a pity.”

Ambassador Power said, “This delegation (DPRK) was informed before this event started that it would have occasion to speak as soon as we’ve heard from the defectors who were the center piece of today’s event; and unfortunately as you heard the delegation chose instead to try to drown out the testimony of these panelists and I will say it must be chilling for those of you have been subjected to the terror of the regime to be confronted with bullying and disruption and the kind of behavior that we saw today.”

Here’s edited video of the incident: