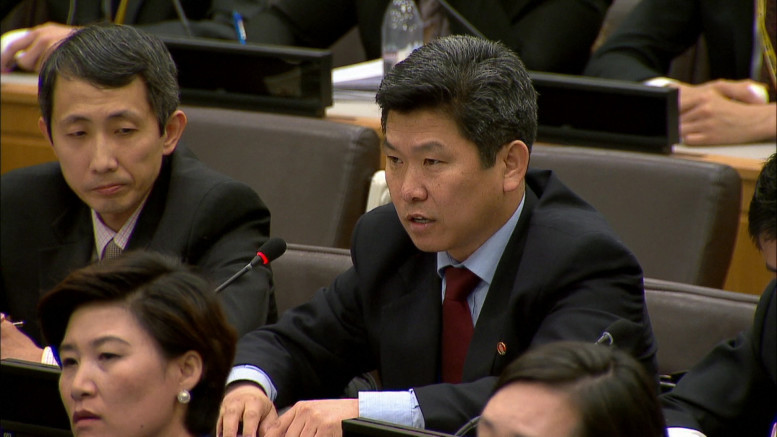 A North Korean diplomat speaks at a human rights event at the United Nations on April 30, 2015.

I now have the full video of the incident on Thursday at the United Nations when a North Korean diplomat interrupted a discussion on human rights.

It would be funny if it wasn’t so sad.

At the meeting, the diplomat began speaking just after a defector ended his speech and without being recognized by the chair, journalist Barbara Demick. After giving him a few moments to speak, Demick asked them to reserve their comments for the question and answer period, but they continued.

You can see the whole thing here.

“I think the audience will agree that it’s better to allow the DPRK to speak as it’s a self-discrediting exercise and we will resume our panel,” said Power. “Conclude your statement and we will go back to our panel.”

It’s at that point that things started getting more out of panel.

Others in the room started shouting at the North Koreans in Korean and then the microphone in front of the diplomat went live, amplifying his words.

“Please shut the mic down since this is not an authorized presentation,” said Power. “If we could ask the acoustic people. Please ensure that the microphone is not live.”

After indulging the diplomat for three and a half minutes, people were starting to get out of their chairs, speak to the North Koreans and take photos.

Then, after just under four minutes, Powers announced U.N. security was being called.

“Sir, you can either conclude your remarks or you will removed from the room,” she said.

But the diplomat continued and the panel continued to show remarkable tolerance, looking more bemused than anything else.

Six and a half minutes later, the speech was over and the event went on.

When you spend a lot of time talking about freedom of speech, it’s perhaps inevitable that questions are asked when you order microphones to be shut off.

Later in the day at the U.N.’s daily briefing, Matthew Lee, a resident U.N. reporter, asked the organization about the decision to switch the microphone off.

At the time, the spokesman said he wasn’t aware of what happened, but on Friday distanced the United Nations from the decision saying it wasn’t an official event.

It was organized by the U.S. and South Korean missions.

DPRK takes “The Interview” movie complaint to the UN

3 Comments on "More on UN meeting, silencing of DPRK microphone"