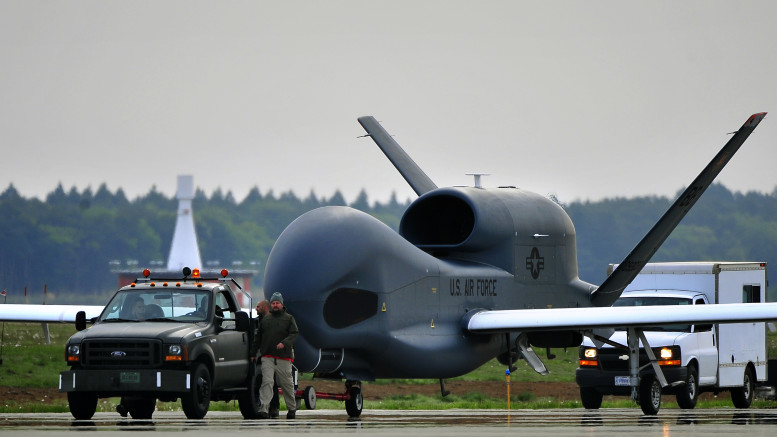 An RQ-4 Global Hawk from Andersen Air Force Base, Guam is towed down the taxiway at Misawa Air Base, Japan, May 24, 2014. The RQ-4 Global Hawk is a high-altitude, long-endurance unmanned aircraft system with an integrated sensor suite that provides intelligence, surveillance and reconnaissance, or ISR, capability worldwide. (U.S. Air Force photo/Staff Sgt. Nathan Lipscomb)

The U.S. Air Force’s Global Hawk drone landed in Japan for the first time on Saturday.

The aircraft is one of the most advanced unmanned craft in the world and is typically used for surveillance and eavesdropping missions from its perch at around 60,000 feet — well above the level of commercial aircraft but lower than the maximum altitude of the U2 spy plane.

Usually based at Andersen Air Force Base in Guam, the Global Hawk landed at Misawa Air Base in northern Japan on Thursday, May 24, as part of a bilateral deal with Japan signed by U.S. Secretary of Defense Chuck Hagel in October last year. The deployment isn’t permanent but the U.S. hasn’t said how long it will last. 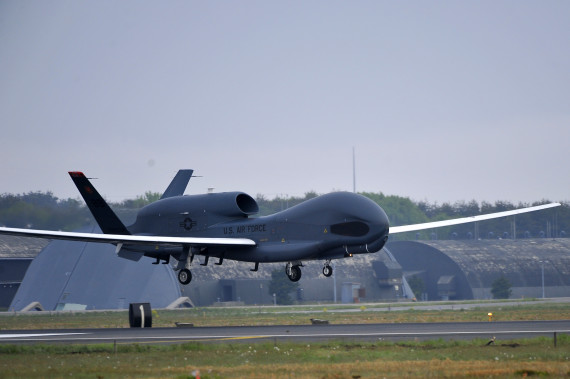 An RQ-4 Global Hawk from Andersen Air Force Base, Guam lands at Misawa Air Base, Japan, May 24, 2014. The aircraft is part of the 69th Reconnaissance Group Detachment 1 and is the first Global Hawk to land in Japanese territory. (U.S. Air Force photo/Staff Sgt. Nathan Lipscomb)

With a range of around 14,000 kilometers, all of North Korea was already easily within reach of the Global Hawk from Guam, should it have been sent there. Taking off from Misawa will mean quicker deployment over the country and a more time in the air, if that’s part of its mission — something that is likely.

For now, the Department of Defense isn’t saying much about what it will do from Japan.

When asked at a Washington news conference on Friday about the drone’s mission in Japan, DoD Press Secretary Rear Admiral John Kirby only painted the broadest picture of what it might do.

There’s an advantage for the U.S. Air Force in bringing the Global Hawk to Misawa. The summer weather in Guam includes regular typhoons that can ground the aircraft and impact missions. Japan isn’t typically hit by typhoons until much later in the season so the drone’s mission schedule should be more reliable.

While this is the first time the Global Hawk has landed in Japan, it’s not the first time it’s flown over the country. The U.S. used it in the aftermath of the March 2011 earthquake and tsunami to survey damage along the coast and at the Fukushima Daiichi nuclear power plant.

Both Japan and South Korea have said they would like to buy Global Hawk drones of their own.